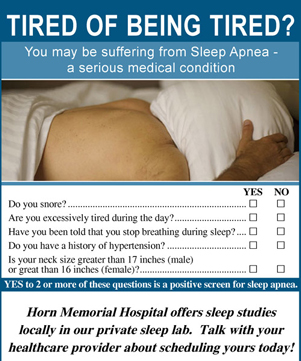 Maintain and upgrade the facilities, equipment and instrumentation necessary in the technical health care arena of today.

Support and encourage combined development of programs and services to meet the changing needs of area residents.

Past projects that the HMH Foundation has contributed to for the betterment of the Horn Memorial Hospital and Horn Physicians Clinics:

Laboratory Equipment:
The HMH Foundation contributed to the funds required to purchase a new chemistry analyzer for the HMH Laboratory Department.

Digital Mammography:
The HMH Foundation helped to raise funds for the purchase of a digital mammography machine for the HMH Radiology Department.

Bone Densitometer:
The bone densitometer is used to assess the strength of the bones and the probability of fracture in individuals at risk for osteoporosis.


Inpatient Project:
In 2016, the Foundation donated $185,000 to the Inpatient Building Project. These funds were raised over several years with the foresight of new patient rooms someday becoming a reality. The hospital broke ground for a new inpatient wing in June of 2016.

Patients were moved to the new unit on July 17, 2017. The project in its entirety was completed the fall of 2017 and a garden party open house was held the following June for major donors.