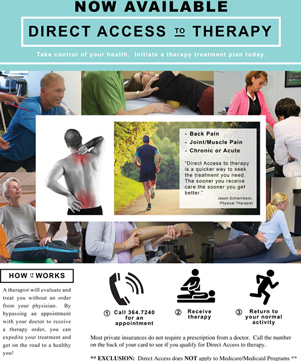 Horn Memorial Hospital's history began in 1905 when Dr. J.E. Conn came to Ida County and opened a hospital in conjunction with his brother Dr. Carl Conn. The Conn Brothers Hospital was located in a house referred to as the "Spaulding Place". It had 1 operating room and 11 patient rooms. Single rooms were priced between $12-$20 per week, depending on the attention the patient needed. Dr. J.E. Conn died in March, 1918 and his office and practice were bought by Dr. E.W. Bookhart in 1919. Today, the building is still standing and is now an apartment house located just south of the community hall.

In 1914 Drs. E.C. and E.S. Heilman (father and son), along with Dr. T.J. Houlihan opened the H and H Hospital which had room for 12 patients. One of Ida Grove's most famous residents, Harold Hughes, was born there in 1922. It was operated for several years until the doctor's partnership dissolved.

In 1919, Dr. R.B. Armstrong leased the second floor of the Pilcher Hardware building for a hospital. He and Dr. E.S. Parker formed a partnership. In 1931, they sold their practice to nurses Lillian Hollander and Elizabeth Rock who moved the hospital to the corner of Second and Moorehead Street. The nurses maintained the hospital until 1935 when they bought the A.C. Johnston home at the south end of Barnes Street, now the site of the St. Paul Lutheran Church. The nurses operated the hospital until furnace problems forced the hospital to close in 1942. The patients were then transferred to Battle Creek for approximately a month. The hospital closed for good in 1944. The City of Ida Grove purchased and remodeled the hospital and reopened in 1945.

In 1959, the State Health Department notified the city hospital that it was not meeting state regulations, which spurred the development of what would be the present day Horn Memorial Hospital. In 1961 a massive community fundraising effort was organized to build the new hospital. The land on which the hospital is built was donated by Russell Hultgren and Harold Godbersen. Lee A. Horn was the major contributor to the hospital, and Horn Memorial Hospital was named in his honor. Ground breaking ceremonies were held on November 8, 1964. The hospital was dedicated Sunday, May 15, 1966. It officially opened its doors, May 29, 1966 and admitted its first patient on May 30th. Horn Memorial Hospital was the first hospital built in Ida Grove to be used as a hospital. Horn Memorial is now a 25-bed Critical Access Hospital offering many services and specialty clinics. In 2008, Horn completed a ten million dollar facility improvement project to ensure state of the art healthcare today and well into the future.